The Cronut phenomenon has little to do with the food itself; it has a lot to do with the line 300 hipsters deep outside Dominque Ansel’s Bakery in the biting SoHo cold, waiting for their opportunity to Instagram a unique lived experience with thousands of other subcultural d-bags. 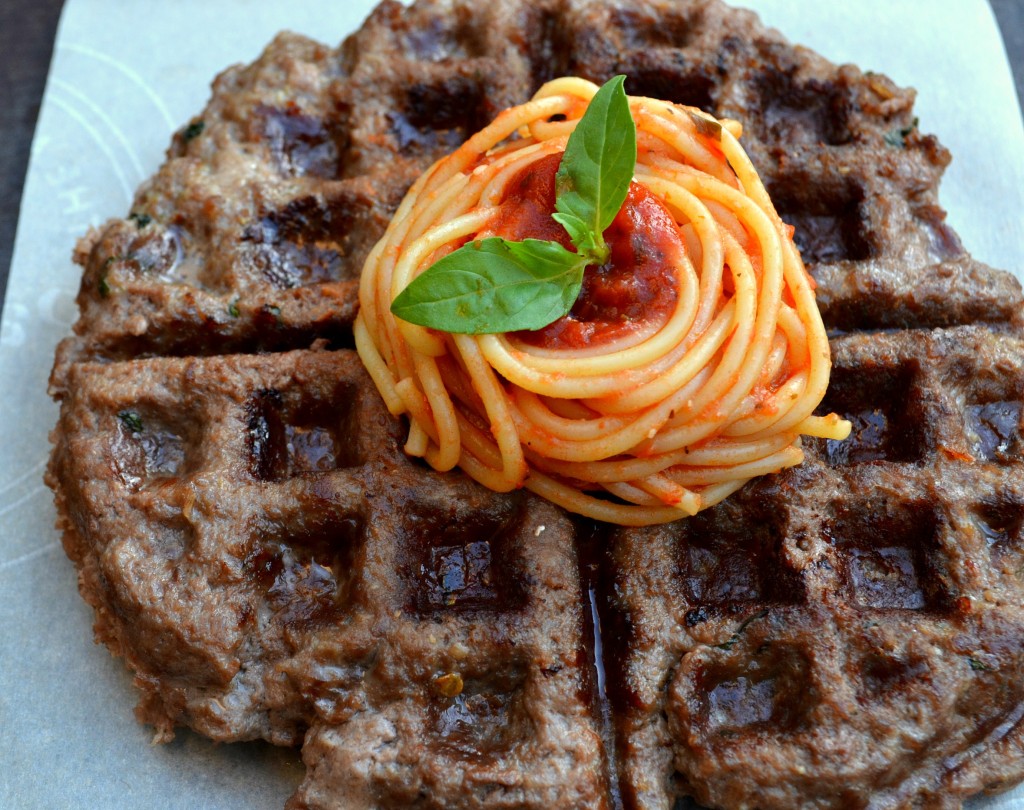 Hipsters are, by nature, pack animals. It takes a single alpha-hiptser, the one with the thickest non-prescription lenses, the highest PBR kill count, and the most fixed-geared of fixies, to get in a line, look disinterested, and start a million dollar trend. The other hipsters can smell it on him.

It’s like a hipster pheromone system, where the strength of his scent indicates how many of his friends are DJ’s, or how many underground slam poetry readings he’s been to. Twenty-six. He has twenty-six DJ friends, and they’re all eating Cronuts. 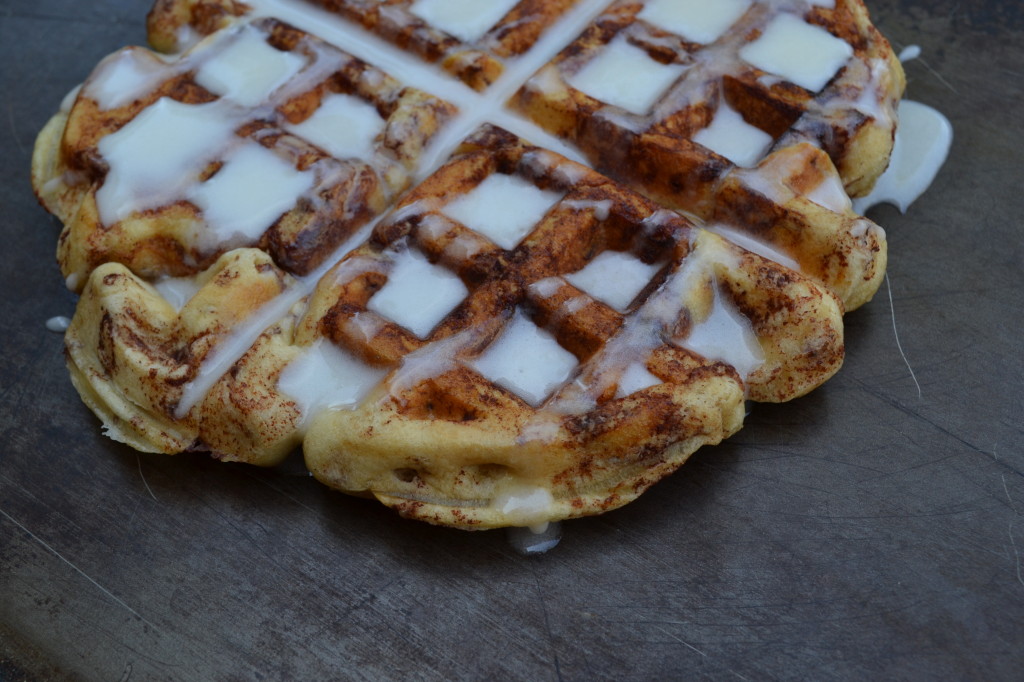 Fuck a Cronut. Fuck it. It’s stupid. Not the product itself, Cronuts and their knock-off counterparts are cool, but the self-perpetuating hype machine that surrounds them represents everything shitty about the Hipster Industrial Complex It tastes good, sure, so do a lot of things, but no food outside of the McRib deserves that level of fetishization.

“I’m going to name my first-born child Cronut, and my second born CakePop, because I’m a cool progressive parent, and definitely not just an asshole who names their kids after Starbucks items.” 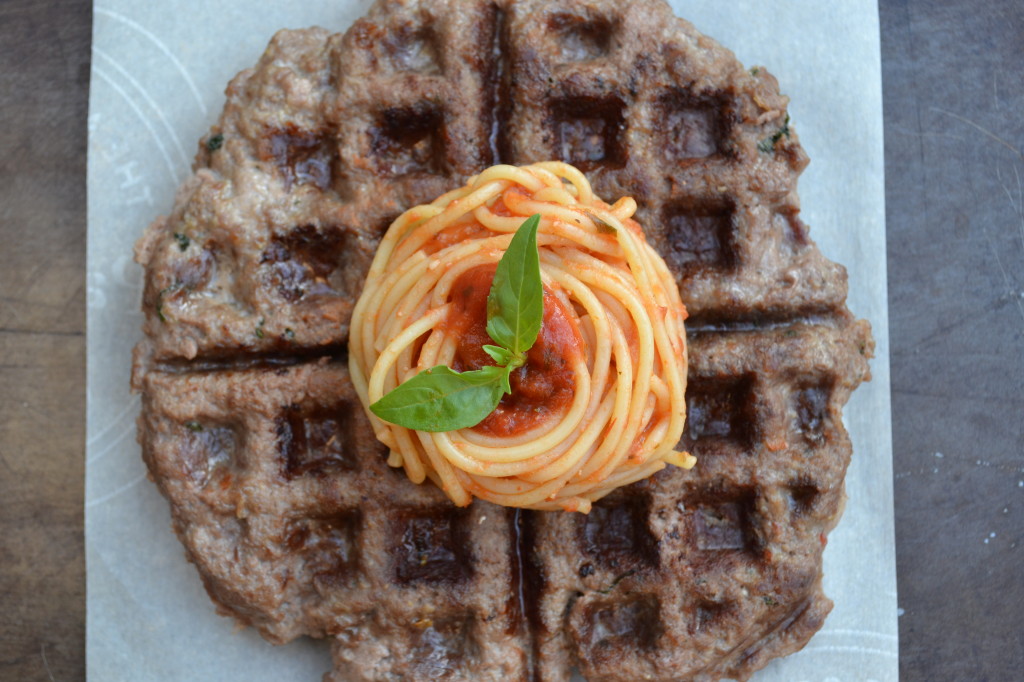 Even though I hate hipsters, I hate them more than anything in the world, I instinctively crave their approval.

Maybe I’m afraid that if I don’t eat ramen burgers or don’t listen to Neutral Milk Hotel, I won’t get invited to their friend’s DJ debut in some abandoned warehouse, where the only music they play is a genre that doesn’t exist called “ambient eco-step”. It’s like if Diplo made beats out of Blue Jay calls and babbling brook noises. But it’s not that, it’s something less tangible.

Uniqueness is a biological urge; everyone wants to set themselves apart from the herd in hopes of being sexually selected. Hipsters have created the single most dominant and codified means to uniqueness that this generation has ever seen; they are now the sole arbiters of cool. Kanye West, NATO, and hipsters – that’s who makes the world turn, and I want them all to love me. 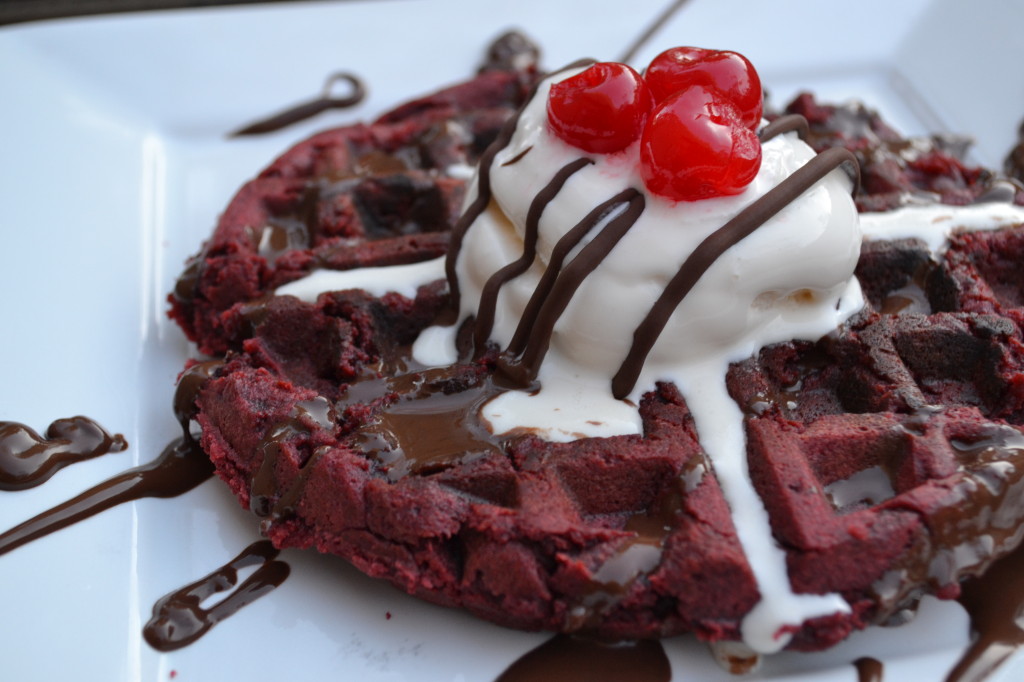 Dominique Ansel – the Godfather of hipster treats – just dropped his newest creation, the “Waffogato”. It’s a combination of ice cream, bits of Belgian waffle, and tapioca, frozen into a waffled lattice, and ladled with hot maple syrup infused espresso.

At first I was like, “Man, this is a really cool thing! I bet it tastes good!” But then I was like, “No way man! The fact that it’s shaped like a waffle is arbitrary and pandering!”. Then I was like “arbitrarily waffle-shaped panderings, that’s fucking awesome!” Some would call that episode manic-depressive.

I call it manic-delicious. I think this is a genius way to find the next big trend – throw a bunch of shit into a waffle maker, and see if any of the finished products make you a millionaire. So that’s what I did all weekend, and after multiple failures, I think I found my Mona Lisa.

This is the first original thing I’ve done in my life
Spaghetti and Meatbwaffles
(Where you at Rachael Ray?) 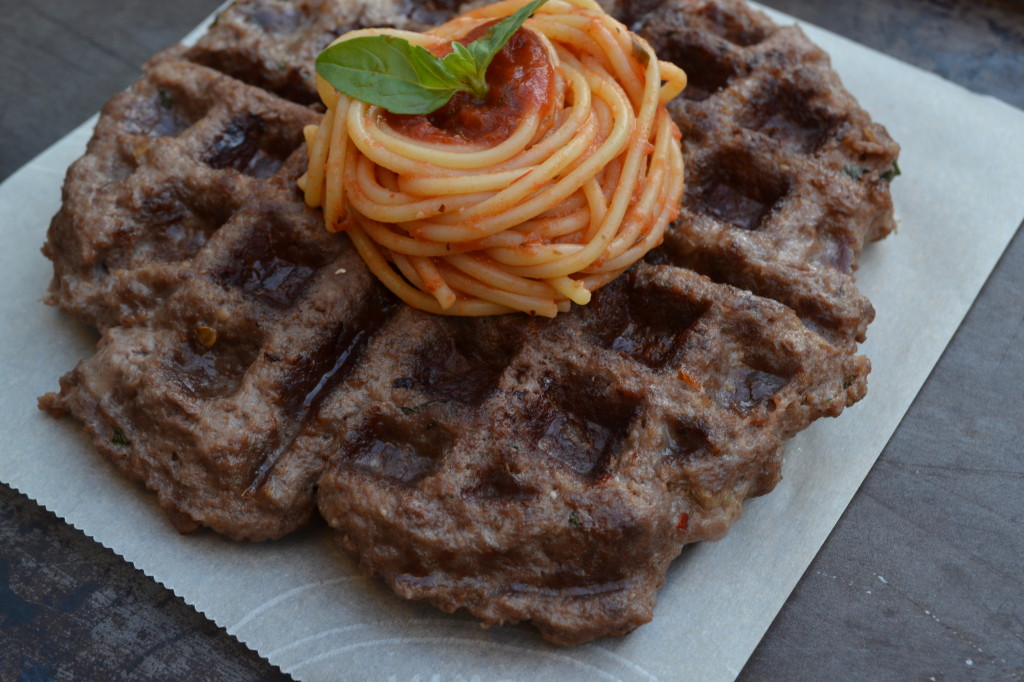 1) Heat 1 Tbsp of olive oil in a large sautee pan over medium-low heat for 2 minutes. When the oil moves freely across the pan, add your onion and garlic and sweat until translucent. Don’t let them brown, don’t you do it motherfucker, you want them to retain their most aromatic flavors without being caramelized.

2) In a large mixing bowl, combine all the ingredients with your sweated onions, and mix together by hand. It doesn’t really matter if you over-mix your meat here, it’s being thrown into a waffle maker, nows not the time to question technique.

3) Preheat your favorite waffle maker, lather that shit in butter, then slam a fat handful of ground meat mixture into the iron and shut it as hard as you can, making sure the meat covers the entire surface area.

4) Waffle your meatbwaffle for like 7 or 8 minutes, browning the outsides, but being careful not to burn it. If you need to lower the temp, lower the temp this is an intricate dance with death.

5) When your meatbwaffle is sufficiently waffled, slide it out onto a plate, top with spaghetti, marinary, parmesan, and fresh basil. You’re welcome, world. 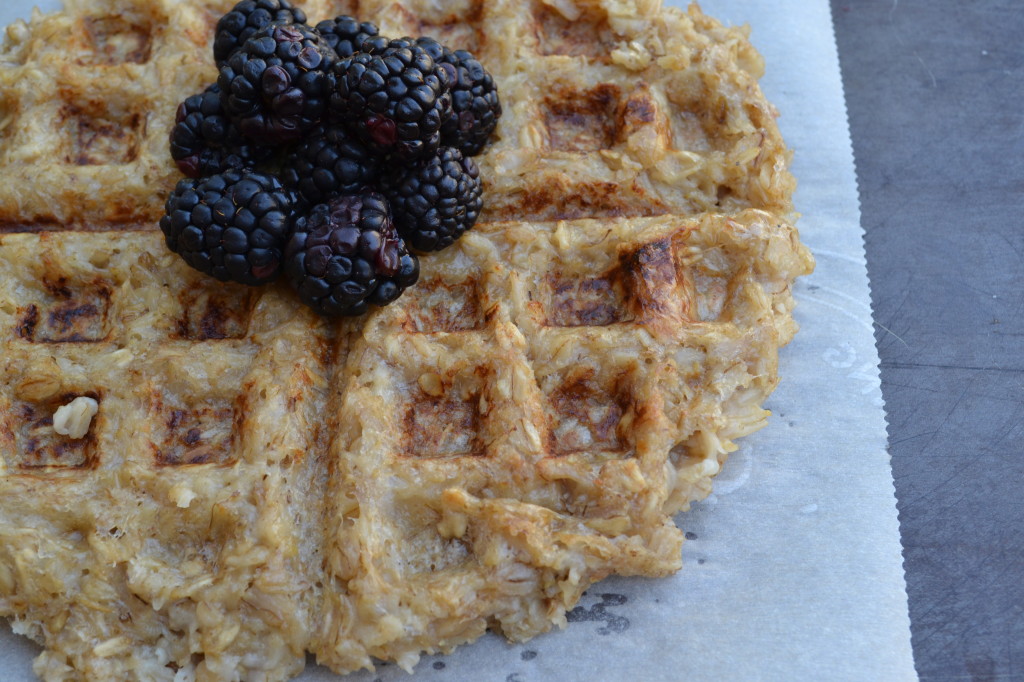 I thought I’d wake up to a nice healthy breakfast of blackberry waffloatmeal.

This should not have worked. I literally just cooked oatmeal, poured the sludge into a waffle iron, walked away for 10 minutes, and this came out, all fucking beautiful and topped with blackberries and on a cookie sheet and shit. I ate it like a taco. It tasted like oatmeal. 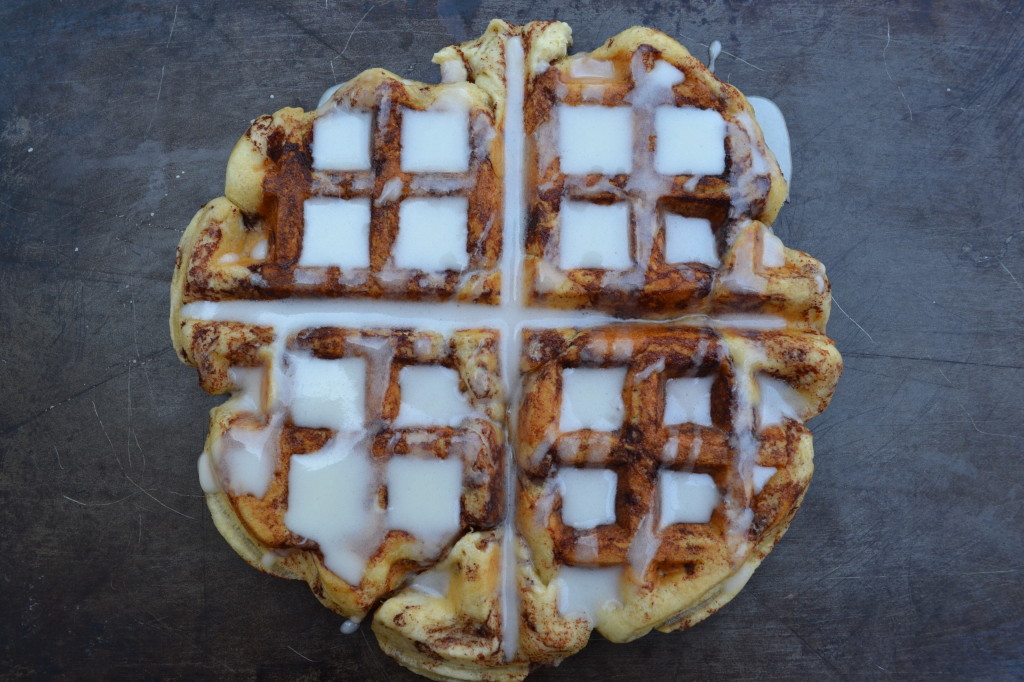 For second breakfast – I weigh 260 lbs, eating oatmeal is like shooting a BB gun at my hunger tank – I waffled cinnamon rolls. They weren’t mine either, they were my roommate Max’s, I just found them in the fridge.

I still haven’t told him that I ate them. Sorry Max. This sweet, jizzy mess was incredible though. It’s actually the best, most efficient way to eat shitty premade cinnamon rolls, it takes like 4 minutes for them to cook in a waffle iron and 12 in a normal oven. You can’t afford not to waffle your buns. 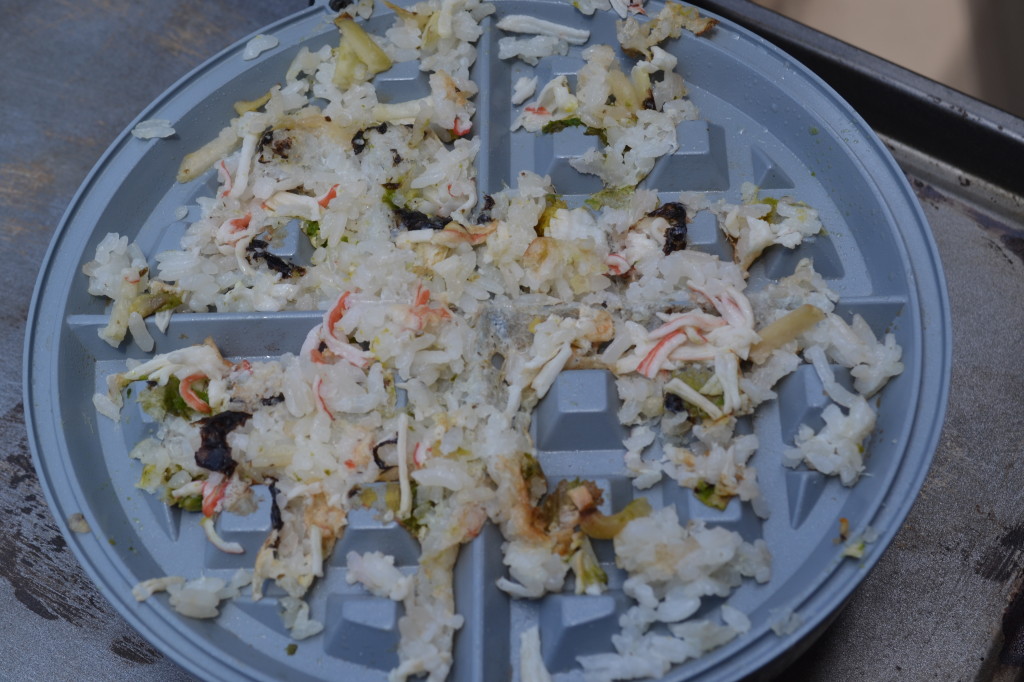 I’ll be the first to admit it, I fucked up. I flew too close to the sun on this one.

I thought it would be a good idea to mash a couple Cali rolls together, throw it in a waffle maker, top it with sriracha mayo, eel sauce, black sesame, and ikura; but that mess you see above is all that came out. Just wasn’t meant to be. Thanks Obama. 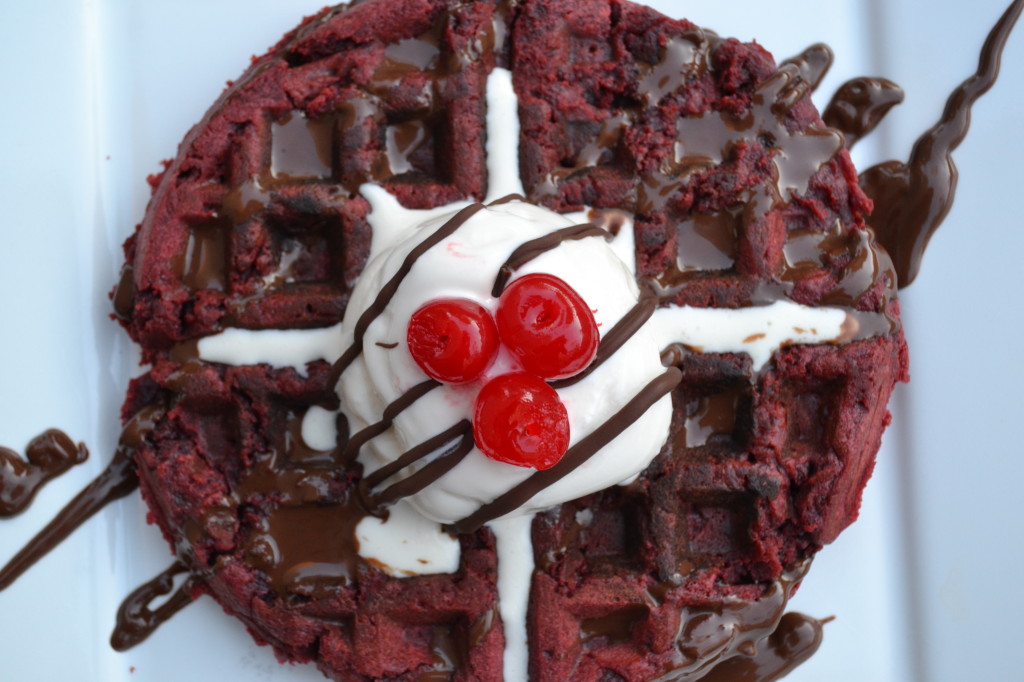 A red velvet waffle dessert sounded like a good idea, but I don’t believe in baking, so instead of making my own batter I bought two fat slices of premade red velvet cake from Ralph’s, mashed an egg into them, and threw it in the waffle iron.

It got a little mangled, but this worked way better than it should have. Also, and I’d like to end on this pertinent note – fuck red velvet cake, fuck it with a spoonula, it’s chocolate and red food dye, fuck that, it’s dumb.