Happy Thursday, everyone! You’ve made it over halfway through the week and for that I am #ProudOfYou.

One of my goals this year was to create more savory/main course meals for you guys, and I’m doing my best to keep that promise! I’m naturally better at baking and creating “healthified” sweet treats, so when I go savory, I like to keep things SUPER simple. Enter: this recipe.

Seriously, you guys, for being a food blogger, some of my meals can be real boring. Exhibit A: for the past two nights I’ve literally been throwing whatever we have in the fridge into a big, fluffy omelet and calling it dinner.

I get home from coaching late and usually have zero motivation to actually cook anything. Spinach, sweet potato, onions, tomatoes. #NoVegLeftBehind. I just throw it all in with a few eggs and hope for the best.

But I actually wanted you guys to like me, so I tried to step up my game with this hash.

This is exactly the kind of thing I would make for guests if I was trying to impress them, but didn’t want to put in a lot of time/effort.

Does that make me an awful person? I only say that because this recipe is super easy to make, but looks like a real-deal fancy meal. Plus, the sage just makes it seem so sophisticated, doesn’t it???

Sweet potatoes are one of my all time favorite foods because they are SO versatile. Baked, roasted, microwaved, stuffed in baked goods. They are the ultimate utility vegetable in my mind. Not to mention they are ridiculously good for you.

I actually once heard someone say that if you could only take one food with you on a deserted island, you should take sweet potatoes. Not sure what the reasoning behind that was, but I can’t say I hate it. As long as I could also sneak some almond butter onto the island, I think I could survive quite nicely. 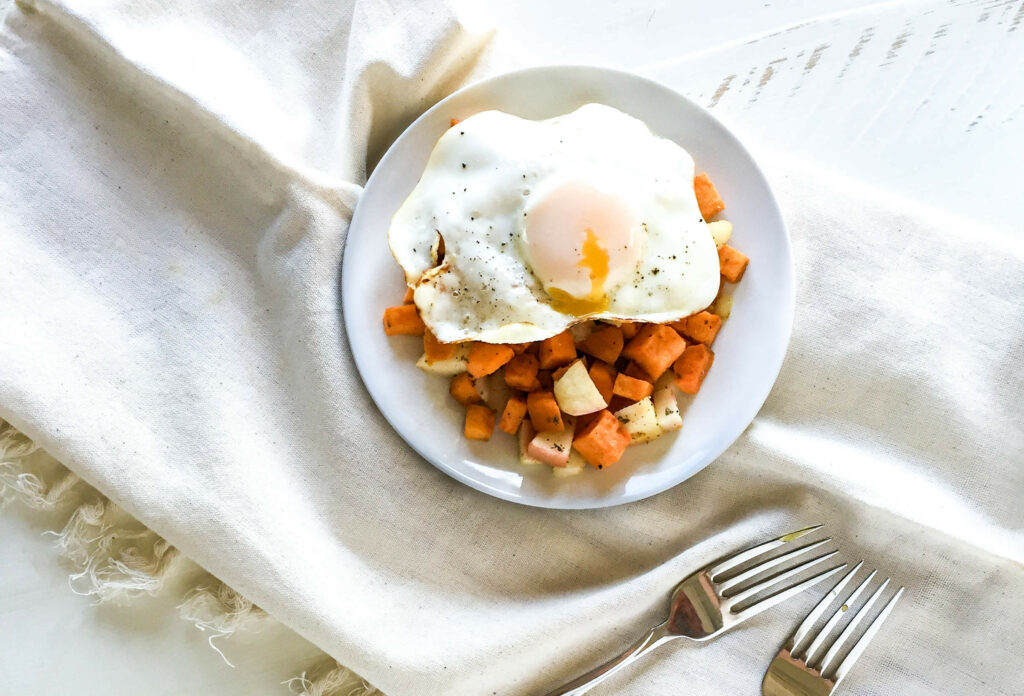 So there is a restaurant here in Columbus called Northstar Cafe, which, if you’ve been reading for awhile, you’ve definitely heard me talk about before (like when I recreated their Chopped Salad!)

Northstar is like that one old friend you can always count on. It’s good for you, always there when you need it, and smells like a giant peanut butter cookie when you leave. That’s the kind of friend I want in my life, at least.

Anyways, Northstar does all around amazing things with sweet potatoes, including making some of the best sweet pot fries around. But, they have an even better item on their breakfast menu, which is some kind of turkey sweet potato hash.

I could live off of that hash if necessary, not going to lie. And it’s always topped with a perfectly runny egg that just oozes all over the rest of the plate. Nothing like some good yolk action, am I right?

So you can do yours up like Northstar with a little breakfast sausage and an egg (highly recommended), or throw in some spinach for a little green action, too. It’s your call!

Melt coconut oil in a skillet over medium heat.

Add in sweet potato and onion and sauté until onions become translucent and sweet potatoes start to soften.

Add in apples and continue to sauté.

Season with sage, salt, and pepper and mix to incorporate.

Serve with egg or sausage if desired.