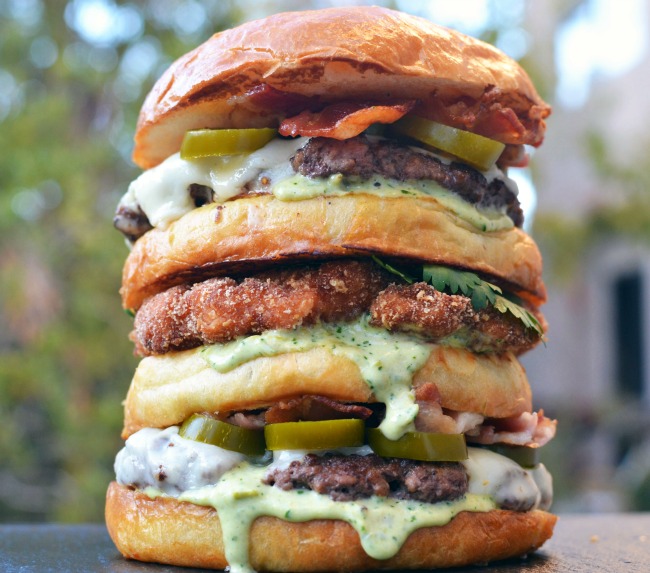 In this case, the chicken sandwich is theoretically being penetrated by the cheeseburgers from multiple angles (think Eiffel Tower as opposed to Tip Drill) in an exclusively passive manner. Even though gang-bang is the most accurate term for this burger, I don’t want to offend or trigger any readers, which is why we have adopted the name McConsensal-Group-Sex-Burger.

We also realize that by explaining this at length we have undoubtedly offended and triggered more people than if we had just stuck with “McGangbang.” I can only respond with, “fuck it, yolo.” 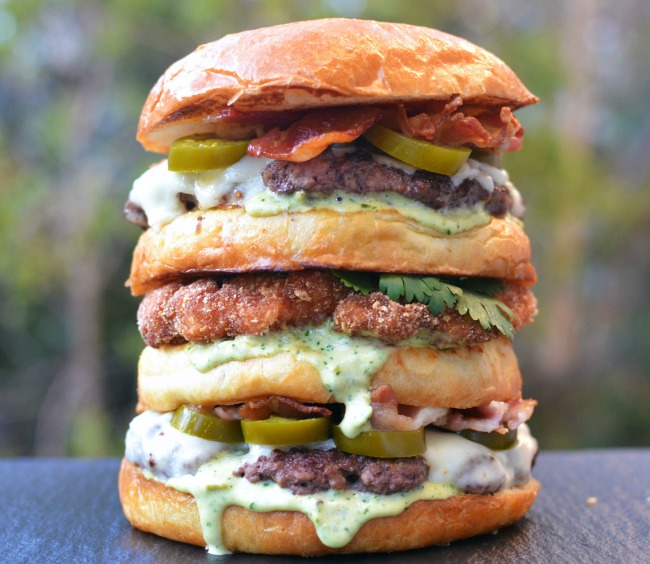 Man, that editor’s a real hard-ass, right? He’s probably overweight and has poor personal hygiene. Anyways, now that we got all those legal issues cleared up, on to what I came here to talk about: America’s fat. And stupid.

I guess that goes without saying, you’ve seen movies, you’ve heard what other people say about us (for all 7 non-Americans who read this, you can leave the room), but I want to address a different problem — we think we know why we’re fat, and we’re wrong.

You thinking that the causal mechanism for such an endemic problem starts with the individual level is fucking dumb. And destructive.

If someone had said, “This is an indication of America’s fetishized and overcommodified relationship with food,” fucking fine, I agree dude. But “this is WHY America’s fat?”

If you looked at a chicken sandwich lying next to a double cheeseburger, you wouldn’t think anything of it. You’d think, “There’s a slightly shittier than average meal for an adult.”

But slap the chicken sandwich between the double cheeseburger and suddenly it becomes this depraved amalgam of obesity and Obamacare-causing quasi-foods. It becomes the salient indicator, the shibboleth of America’s largest health problem since fucking polio.

A few months back I made a funnel cake burger which some of you might remember. It was a little depraved, a little cheeky, but overall a tasty, fun, and benign adventure in culinary shenanigans. Some people took incredible offense to it.

One person said, “This is how people get diabetes.” Another individual with big ol’ pathos dick hanging out of his pants said, “My mom died of diabetes, this is fucking sickening.” Dude, if a doctor could verify that your mom’s insulin resistance was the direct result of her consuming funnel cake burgers on a regular basis, then fine, I will sincerely apologize for triggering you. Shit, I’ll send you a gift card to Chili’s for reparations. But, and this is likely the case, if it was due to a lifetime of poor dietary education, mindless eating habits, and a sedentary lifestyle, then kindly fuck your own face and deal with your grief in a rational and healthy manner, you needlessly confrontational shit-bag. 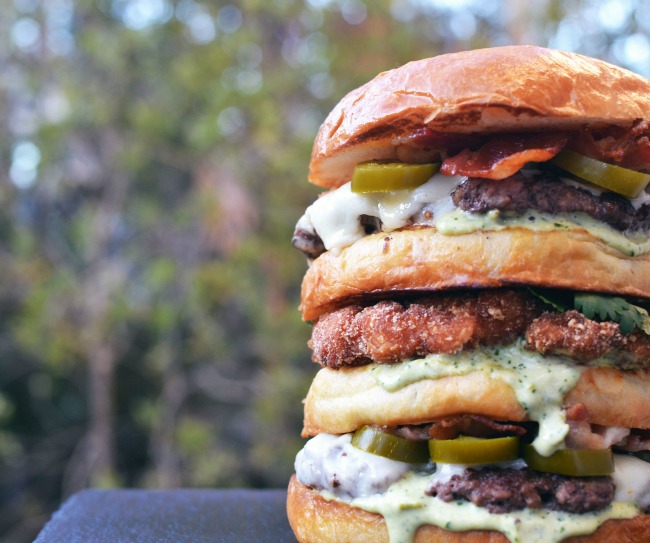 It’s not these over-the-top internet creations that cause widespread health problems, it’s the things that people mindlessly eat every single day. Why do you think diabetes disproportionately affects the Filipino-American community?

Funnel cake burgers? McGangBangs? Nope, swing and a miss: white rice. That shit breaks down into glucose like fucking cake, but no one would ever comment on a bowl of white rice and say, “hey, that was irresponsible to make in this climate of diet-related disease.”

Now, let’s get all gestaltian up in this bitch and start breaking things down into their individual parts.

The funnel cake burger — along with the McConsensual-Sex-Burger — is terrible for you, that’s a given, but in comparison to the rest of the shitty foodscape we graze on it’s pretty fucking on par.

The funnel cake burger has the same nutritional content as a normal hamburger and french fries: burger and fried starch, it’s the same fucking thing. But no one would ever look at a picture of a Double-Double and fries and blame it for the billions of dollars spent on Lipitor every year.

These singular, hyper-visible things don’t damage on a large scale, it’s the shit we eat day in and day out without any requisite effort that does.

It’s the fact that Pop-Tarts are considered an appropriate breakfast for children, that Olive Garden sells season-fucking-passes to their pasta trough, and that $8 buys you 3200 calories at Little Caesar’s that this country is so deep in our own gluttonous shit-hole that we’d rather buy blood pressure drugs than fresh vegetables.

Anyways, I thought it would be fun to mess around with a homemade version of the most depraved fast food item out there, McDonald’s McGangbang. It’s a McChicken stuffed inside a McDouble stuffed inside your raunchiest wet dream. It’s perfect. Sorry about the diabetes, world. 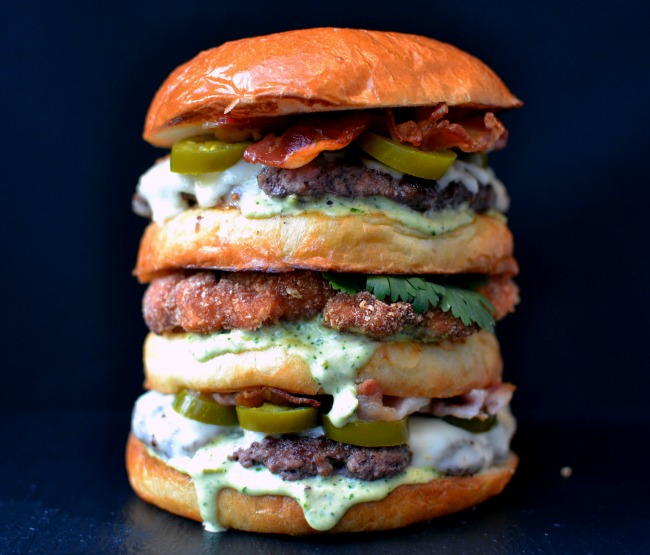 2) Butterfly your chicken breasts. Slice through the breast horizontally while leaving the end still attached and intact. If you’re not familiar with the technique, google it or something — be a fucking problem solver.

3) Pound out the chicken breasts with a blunt object (empty Jager bottle does the trick) until appx 1/4 thick, go as thin as possible. Cut your thin chicken sheet into circles, using your buns as a primer for the size, then season liberally with salt and pepper.

4) Set up a 3 part dredging station with 1) seasoned flour; 2) egg wash with milk and hot sauce; 3) chicharrones pulverized in the food processor.

5) Dry chicken then dip it in flour, egg wash, chicharrones, and throw that shit in the fryer. After those sweet fatty pork rinds get nice and golden brown, appx 4-5 minutes, remove from oil and let dry on paper towels. Finish with a bit of salt and a squeeze of lime, because why not, right?

2) Throw the the garlic, cilantro, hatch chilies, and egg in a food processor, then process until evenly combined, appx 10 seconds.

3) While the food processor is still going, slowly stream in the olive oil, then the vegetable oil, and emulsify all those fats into submission.

4) When the aioli is all mixed and such, season with salt, pepper, and lime juice. Shit, throw in some lime zest if you’re feel in’ frosty that day. 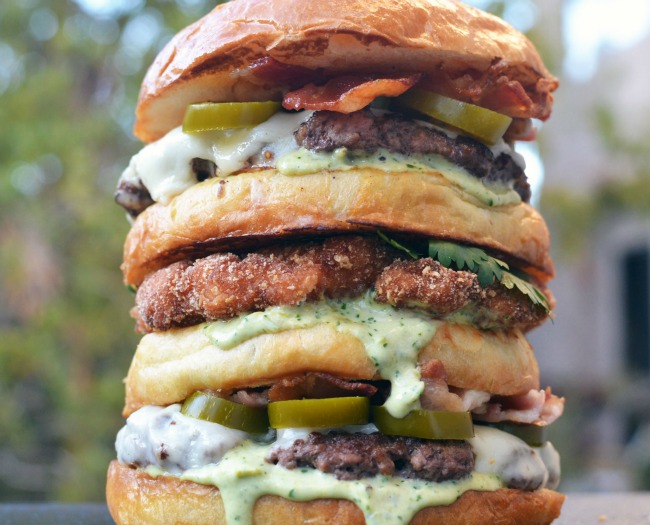 Assembling the McConsensual-Group-Sex-Burger
Stack everything in the following order: