In case you don’t want to read the whole post: people are stupid, people are assholes, I, too, am a stupid asshole.

At some point I meant to talk about my real feelings towards veganism and I never got around to doing so.

There’s such a constant stream of sarcasm and dick jokes that fly off this keyboard that sometimes I look back and think, “man, you said literally nothing over the course of 700 words.” Well, I’m saying things now God dammit.

Take 20 mg of your favorite prescription study drug and grab a fucking seat – I’m about to drop some knowledge. 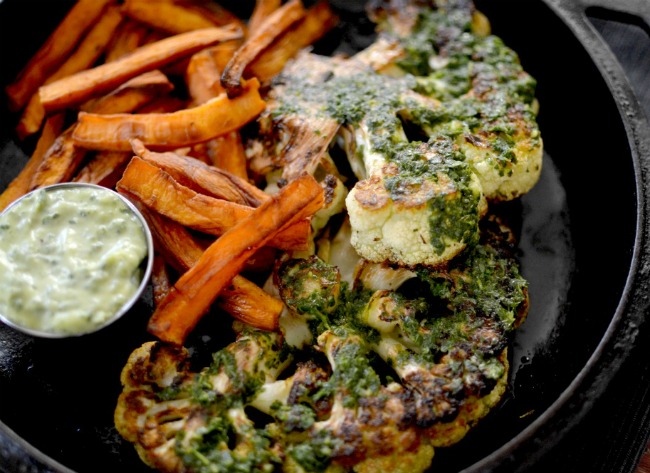 Veganism is the most morally coherent dietary lifestyle on the market right now (aside from Jainist lacto-vegetarianism; but I could write a post on that alone!).

It stresses health, compassion, eco-friendliness, and living things’ rights to autonomy. These are all ostensibly good things.

61% of Americans are obese as all Hell and dietary diseases cost an annual $71 billion in otherwise preventable treatment. Not only are fat people dying, we’re feeding into America’s pharmaceutical-industrial complex.

We should probably stop doing that at some point; at least 40% of Americans agree that dying is a bad thing, and should be avoided.

We could feed 800 million people with the amount of grain it takes to farm America’s livestock. Instead of allowing humanitarian aid groups to distribute that grain to – I don’t know – people dying of starvation or millions of displaced Syrian refugees, we use it to feed other food. And the only response seems to be: “fuck you, I wanna hamburger.”

There’s also overwhelming evidence to suggest that animals feel things like pain, sadness, and emotional trauma. You know how your cat is so intuitive and responsive and it gets all sad and shit when you leave?

Imagine slitting its throat and letting it bleed out so you can eventually grind its flesh into an overcooked and under seasoned burger-filler. Probably feel like an asshole, huh?

The cat meat doesn’t taste as sweet now, does it? Biologically speaking, cows are just giant cats, and their feelings should be treated accordingly.

The world has an ethical responsibility to go vegan – or at least adopt an alternative that yields the same moral, ecological, and health benefits.

There’s an underlying class bias in all this of course (how is someone living paycheck-to-paycheck in an urban food desert supposed to go vegan?), but if you have the means to do so, you should. 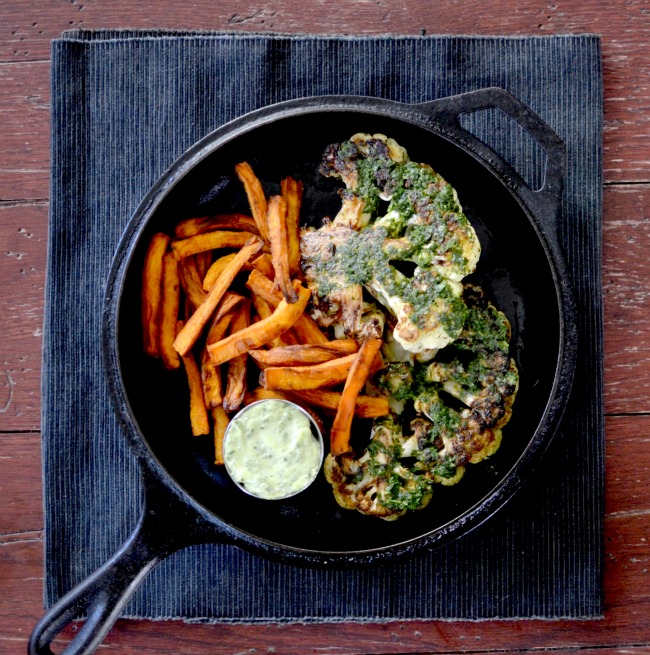 I’m assuming you have some questions, most notably, “Hey Josh, why the fuck aren’t you vegan?”

Ummm…. well…. I uhhhh. Fuck you, you’re not vegan either.

I think I’ve parsed it down to a few things. First, unlike the homie Immanuel Kant, I don’t fucks with the categorical imperative; the drive to be a purely moral actor just isn’t there for me.

My views on morality are almost completely separate from my actions (which sounds terrible now that it’s on paper). I stole a banana from my roommate this morning. I wasn’t starving.

I wasn’t going to face some sort of harm if I didn’t eat a banana, I just wanted a banana, and I saw a banana.

It was a purely immoral act, but I weighed the amount of pleasure I’d get from eating it versus the amount of discomfort Xander would feel being banana-less. Now picture that idea, but multiplied by roughly 315 million Americans who have put a lot less thought into this than I have.

That sucks right? There’s absolutely no hope, and rather than try to inspire change, I’m 100% complicit with the status quo.

I’ve created this arbitrary sliding scale of hedonism versus morality that I can manipulate any way I see fit. For instance, I’m anti-veal and pro-foie gras. Why? Foie gras is worth it, veal isn’t.

The amount of pain and misery that the baby cow experiences is not proportional to the pleasure I get from eating its flesh; nor is it marginally better than its substitutes.

But, foie gras is my fucking jam. I’d shove that feeding tube down the goose’s throat personally if that was the only way to get at its sweet, tortured liver meat (to be fair, geese don’t have gag reflexes… I’ve tested this personally).

I would waterboard the goose in front of its entire family if that’s what it took; that’s how good foie gras is compared to it’s next, less cruel substitute. 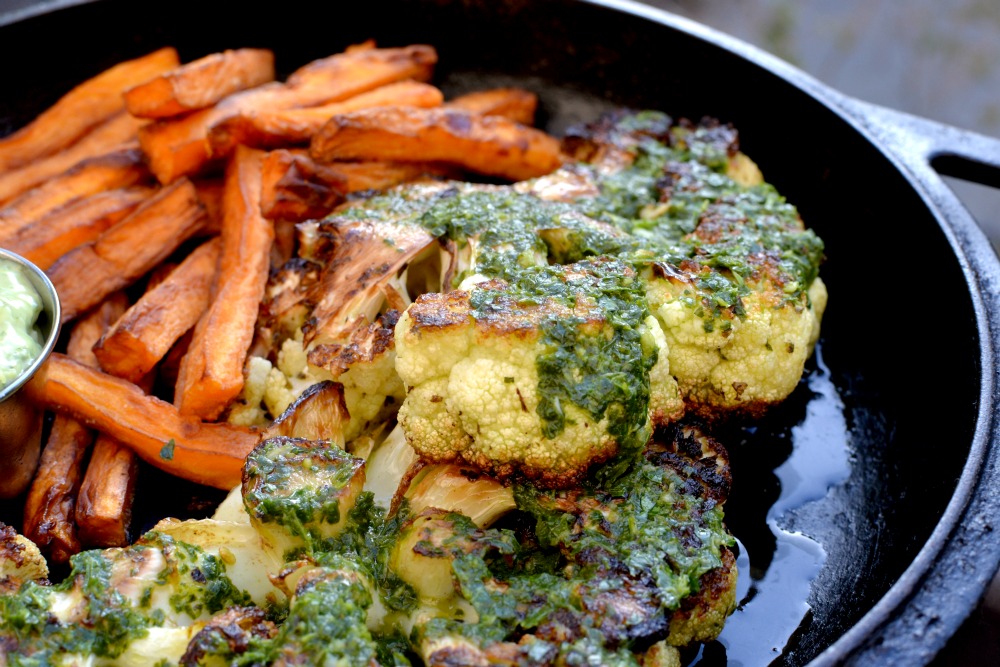 Also, I have this irrational fear that if I can’t squat 400lbs at any given moment, bad things will happen. I know it’s stupid, and it’s framed by some bullshit hypermasculine aesthetic that I simultaneously hate and comply with…. but – and hear me out on this – if a grand piano fell on top of me, and my legs were somewhere in between 70 and 120 degrees, I want to know with 100% certainty that I can back squat my way to survival.

And, segue back to the topic, veganism and powerlifting mix terribly.

I went vegan for an official 26 days, I lost 18 lbs, and, weirdly enough, I had a lot of fun. I never found it difficult to go to restaurants, probably because West LA has more vegans than non vegans, and cooking plant-based dishes forced me to be more creative in the kitchen. I was never miserable, and I wasn’t constantly hungry, but, I did get light headed and tired all the time.

In retrospect, it probably wasn’t smart to jump right into veganism after eating 200g of protein per day previously, but, as the youths say: fuck it, YOLO. It’s not something that I’d ever do again, but it was chill while it lasted.

Thought I’d give you guys one more vegan recipe for the road though. 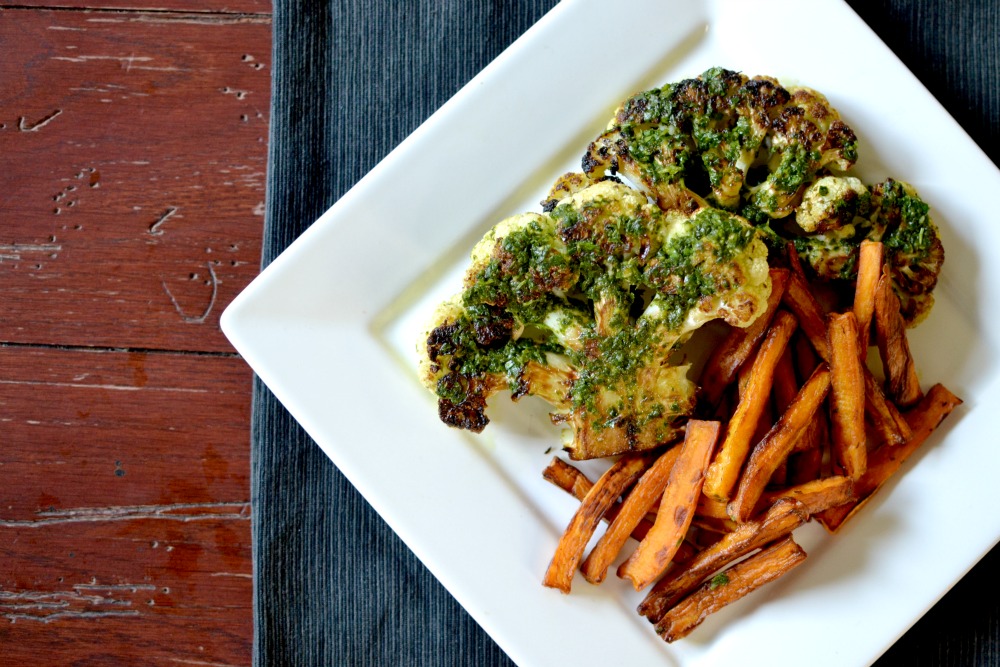 1) Uhhh…. throw it all in a food processor, and process until it looks reasonably processed.

2) Rub a bunch of chimichurri all over the cauliflower and let it sit somewhere for 10 or 15 minutes, just to get the flavors acquianted.

3) Whilst that’s happening, heat your oven to 400 degrees, and heat 1 tbsp canola oil in a cast iron pan on medium-high. When the pan is hot and the steaks are ready, season wit some additional salt and pepper, and throw them in the pan, making sure they don’t touch. Work in batches if you have to, don’t be a lazy asshole about it.

4) Sear the steaks for about 4 minutes, or until a good amount of caramelization starts to form. I like my cauliflower on the more-burnt side, so go crazy (no use going mid-rare on these bad boys). When one side is done, flip it, add some residual chimichurri on top, and throw it directly in the oven for 15 minutes to continue roasting. 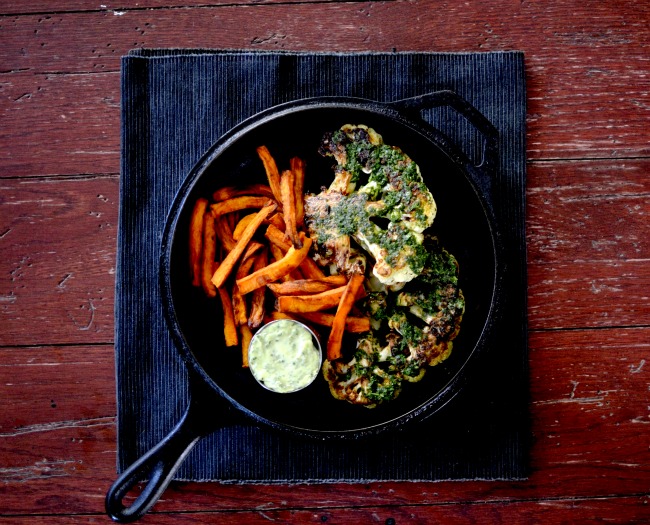 As far as the sweet potato fries go… mine kinda sucked balls. So, I don’t know, probably go snag some from Carl’s Jr. on your way home from work or something. Cheers guys.

30 Boozy Slushes For The Summer

25 Cocktails You Will Want To Try For St. Patrick’s Day

23 Awesome Mini Sandwiches To Get A Party Started